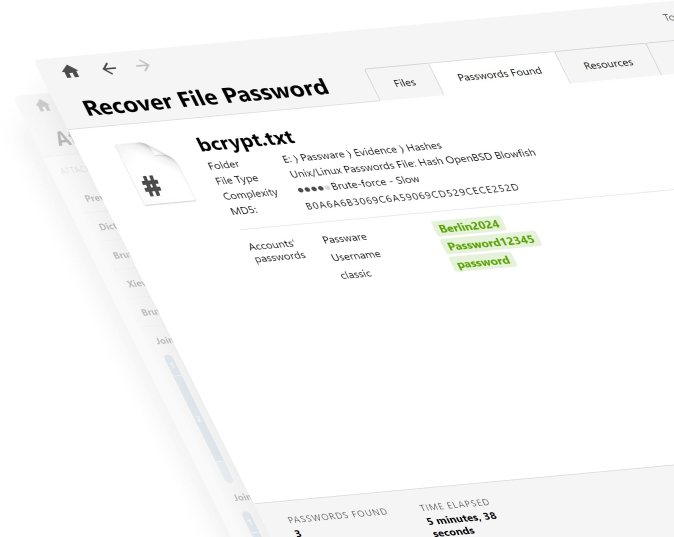 For your convenience, we have put together a video of all the recent features of Passware Kit 2022 v2. Take a look!

Passware Kit Business and Passware Kit Forensic customers only.
Contact Support to get an update for other Passware products.

Passware Kit 2022 v2 recovers passwords from bcrypt hash files. The recovery speed on the CPU is ~160 passwords per second for a default 10-cost hash.

Mac versions of Passware Kit now support OpenCL technology. It means that all time-consuming password recovery processes, which could be previously accelerated on Windows only, can now be also accelerated on macOS with AMD GPU and NVIDIA/AMD eGPUs. Hardware acceleration on Mac is an experimental feature dependent on Apple’s OpenCL drives, which are not 100% reliable.

The GPU acceleration has also been improved on both Mac and Windows versions of Passware Kit, as well as Passware Kit Agent for Linux, with full support for long passwords up to 128 symbols for RAR3 and 7Zip archives.

This feature is also supported by a Mac version of Passware Kit Forensic.

In addition to regular OneNote *.ONE files, Passware Kit now supports OneNote Revision Store files for OneDrive. Password recovery for such files can be accelerated on GPU reaching the speeds of 26,000 p/sec on AMD 6900XT.

We’ve made multiple improvements to the Full Disk Encryption option.

The latest Passware Kit now displays the account names instead of GUIDs for APFS encrypted images on system volumes. It makes it easier to select the correct account to recover the password to.

Instant BitLocker decryption is now possible with a known VMK in HEX format.

Acronis 2021 backup files with a *.TIBX extension are now also supported. The password recovery can be accelerated on NVIDIA and AMD GPUs, reaching speeds greater than 14,200 passwords per second on an AMD 6900 XT.

Passware Kit now detects and extracts a broader range of records from iCloud (Local Items) Keychain for macOS, including Monterey. These records include data, which are not visible using Keychain Access tool.

The new version of the Passware Kit also extracts metadata from iCloud Keychain records on Monterey.

There is now a Troubleshooting tab in the Options dialog box, which allows for advanced configuration settings and simplifies troubleshooting.

Passware forensic products are used by the world’s top law-enforcement agencies to crack cases where decryption is required – with a 70 percent success rate.

Our team has worked hard to build the next generation of decryption solutions for mobile devices – Passware Kit Mobile.

The beta version of Passware Kit Mobile supports the decryption of 160+ mobile devices, including Apple iPhones, iPads, and Huawei phones.